My oldest daughter, Eowyn, turns 4 on the 23rd. It happens to fall on a Sunday this year, so her party gets to be on her actual birthday again (last year it was on a Saturday). Since I was 38 weeks pregnant on Arya’s birthday, we decided to throw them a combination party on Eowyn’s birthday. The party is Frozen themed, which couldn’t be more perfect with the sister theme : ) Of course it wouldn’t be one of my parties if I didn’t do way too many crafts, and I’ve decided to share them with you as we make them. Notice how I said “we”? That’s right–I’m letting the toddlers help. Which can be hard because I lean towards the perfectionist side, but it’s so much more meaningful that we made everything together, rather than it looking Pinterest perfect.

So today’s Frozen crafts were for 2 of the party games: ‘Pin the Nose on Olaf’ and ‘Snow Ball Fight’.

There’s a ‘Pin the Nose on Olaf’ game that you can buy online, but I’m cheap and knew that I could make it myself. I bought a poster board at Walmart for $.90, and all the other supplies I had at home. Although I don’t draw, Olaf is a very simple shape; I mean, he’s a snowman for goodness’ sake. I practiced on scrap paper, and once I was satisfied, I drew him out with pencil (so I could erase mistakes 50 times) on the poster board. Tip–the back of the poster erases much easier than the front.

Not too shabby. Obviously, I left the nose off because…that’s the whole point of the game.

Then I handed over my Mona Lisa to my almost 4 year old to trace with a Sharpie. 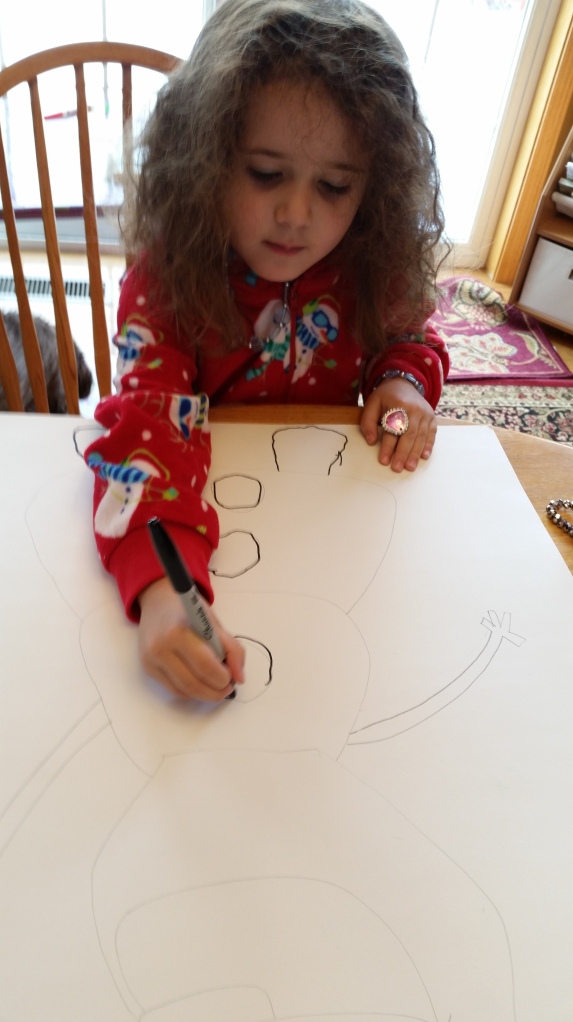 Ary started throwing a huge fit because she wanted to color Olaf too, so she added her own touch.

Good thing Olaf likes colors, because he has a pink foot now.

Then I made some carrot noses out of orange construction paper. To make sure they were all the same size I used the first one I made as a stencil for the rest.

For the party, we’ll throw some scotch tape on the noses and voila! A homemade ‘Pin the Nose on Olaf’ game that cost a whopping $.90. Even if I wasn’t such a cheapskate though, I think I would still opt to make things myself, especially when my kids are involved. I just get so much more satisfaction out of things that I know I made with my own hands. Plus I get to teach my kids something new. Winning all around.

Is it Pinterest perfect? No–it’s better, because my kids made it.

‘Snow Ball Fight’ is simple: give each kid a cup of cotton balls and let them have at each other! The kids and I played this last winter during polar vortex days when you’d get hypothermia if you looked out the window for too long, and we always had a blast. With the snow theme attached to Frozen, I thought it would be a great game for the party.

I was going to make these generic snowman cups that I saw on Pinterest, but once I realized how easy Olaf was to draw, I drew him on our cups instead. Then I let the kiddos fill them up with out “snow”. 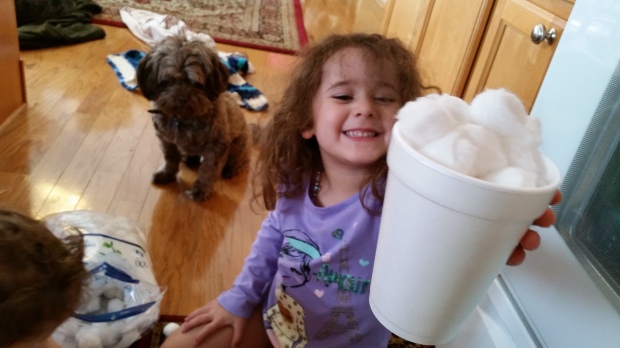 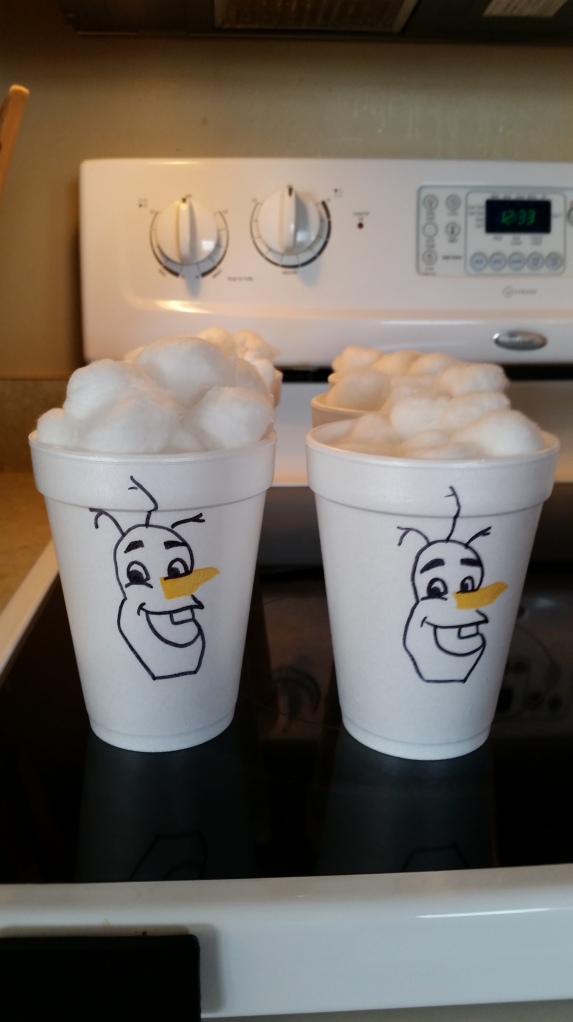 I don’t know how many kids are coming yet, because I just barely got the invites out on Monday, so we filled up 6. The pack of styrofoam cups came with 20 (God, please don’t let 20 kids show up to this thing!), and I drew Olaf on all of them, figuring the extras can be for the adults to drink coffee from. I’ll probably write a quote on the coffee cups like, “I’ve always loved the idea of summer and sun and all things hot” or something.

Well, I’m off to go clean up the disastrous mess the toddlers made while I did these crafts.

Wait, scratch that–#2 is crying. I guess nap time is over.

This error message is only visible to WordPress admins

How I Made Girly Dalek Costumes

How I Made Girly Dalek Costumes